Resources & Links for Land Surveyors and the Public

The Kansas Minimum Standards for Boundary Surveys and Mortgagee Title Inspections, as adopted by the Kansas State Board of Technical Professions, 2009.  There is an update in the works, so check back often.

The Kansas Society of Land Surveyors (KSLS), approved by KSBTP, On Line Minimum Standards Course for 2 hours credit. (You will leave this site)

KSA Chapter 19:  Formerly known as the “county surveyor law”, these statutes deal with center of sections and retracing the PLSS. These requirements now apply to all surveyors and surveys.  19-1434 requires that all surveys that could possibly create a new parcel must be recorded.

Kansas Land Surveyor Trespass Statutes:  The laws that allow surveyors to have legal access to survey markers on private lands.

“Of Monuments and Measurements”  Article in Section Lines, February 2015, by Norm Bowers and Steve Brosemer concerning what to do when encountering a conflict between the two.  What do the courts say?

“Origin Unknown”  Article by Norman Bowers, PS and Steve Brosemer, PS published in the May 2015 edition of Section Lines, by the Kansas Society of Land Surveyors. Unknown, huh? Is that what you really want to say on the witness stand in court or to the neighbor’s attorney during a deposition?

“History of Center of Sections in Kansas”  Article by Norman Bowers, PS and Steve Brosemer, PS published in the February 2012 edition of Section Lines, by the Kansas Society of Land Surveyors.  Things are hardly as simple as you might think!  Do you work in areas that were organized into counties before 1868 and how does this conflict with current statutes?  Then this is a must read.

“Dykes V Arnold Oregon 2006”  An Oregon Supreme Court case that is referenced in the article above. Full text, less maps.  A case that is instructive as to the way all courts look at the surveyor’s duties and obligations when doing retracement surveys, including the concept of “original surveys.”  Underlines the concept of monument and locations that have been accepted controlling locations, regardless of the method of first establishment.

“Kansas County Road Laws” by W. Chip Woods.  Some county or township roads opened through the Road Statutes don’t have a stated width.  This comprehensive chronology is an invaluable source of information for those wishing to find out the legal width of a rural road. Recently revised.

The Cast Iron Monument 2014.  Jerry Penry, David Hoffart and Gene Thomsen of Nebraska do a static observation processed by OPUS on the “Holy Grail” of the Kansas/Nebraska PLSS near White Cloud.  From the February 2015 issue of Section Lines. The photo depicts Surveyor General John Calhoun (Steve Brosemer) admiring the Initial Point of all surveys in Kansas and Nebraska: The Cast Iron Monument.

Did you know that the Original NW corner of Kansas was at the intersection of the 40th Parallel of latitude with the “Summit of the Rockies” as mandated by the Kansas Nebraska Act of 1854?  Steve Brosemer was part of an expedition in 2006 that climbed the mountains to find the “+” on an outcropping of granite that marked the spot!  Click here to download a copyrighted pdf slide show of that journey.  Warning! This is a 10 meg file. 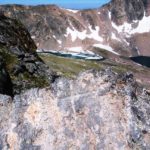 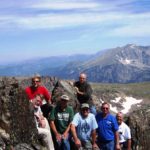